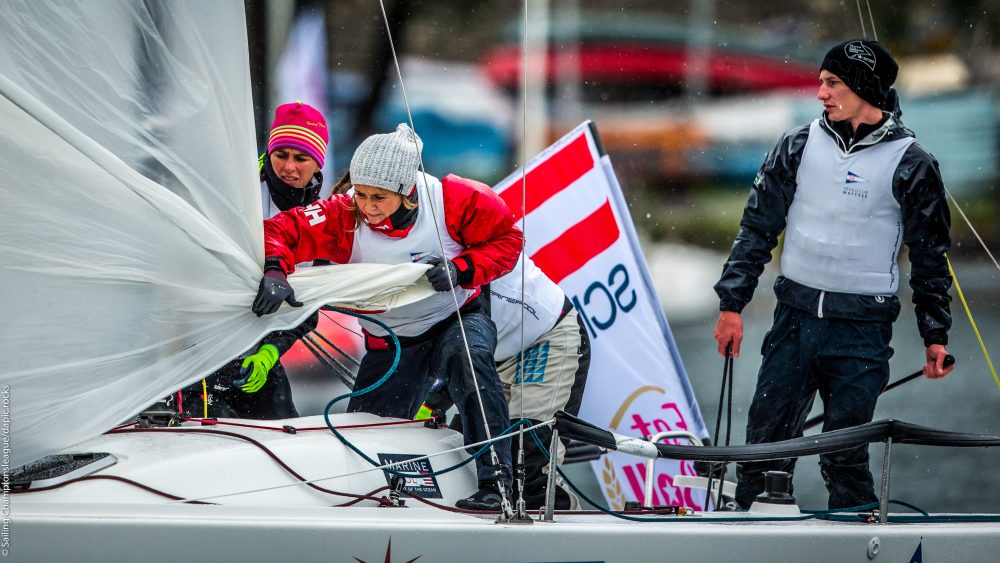 [vc_row][vc_column][vc_column_text]In welcome contrast to yesterday’s unfriendly weather, spectators on the second day of the SAILING Champions League Act 2 in St. Moritz were treated to some exciting racing. With a steadily rising wind during the afternoon, the 24 teams from 12 nations were able to absolve 13 races. At temperatures around freezing point they really had to prove themselves. Segelclub Mattsee from Austria is currently in first place.

“We’re really happy with our performance. In such capricious winds, freezing temperatures and pouring rain, it was not easy for us. Sailing today was very demanding“, says Segelclub Mattsee helmsman Stefan Scharnagl. Also on board were Anna Scharnagl, Hannah Ziegler and Lisa-Maria Leimgruber.

Second place with ten points is currently held by the Hellerup Sejlklub from Denmark. Hard on their heels are their Royal Danish Yacht Club compatriots, in third place with eleven points.

Racing tomorrow starts earlier, with the first race of the day scheduled for 8.30 am. All results will be posted here: www.sapsailing.com.

The SAILING Champions League
This year the best European clubs will be competing in two SAILING Champions League events (Act 1 – St. Petersburg (August) and Act 2 – St. Moritz (September) to qualify for coveted starting positions at the grand finale in Porto Cervo (September). The best sailing club in Europe will then be decided. Races will be held in fleet-race mode with boats of the J/70 one-design class.

As technology partner of the SAILING Champions League, SAP ensures a professional and exciting live-stream. Tomorrow Sunday the races can again be viewed live on the Internet at www.sailing-championsleague.com as of 12 noon.