Act 2 St. Moritz: The weather brought them to their knees. 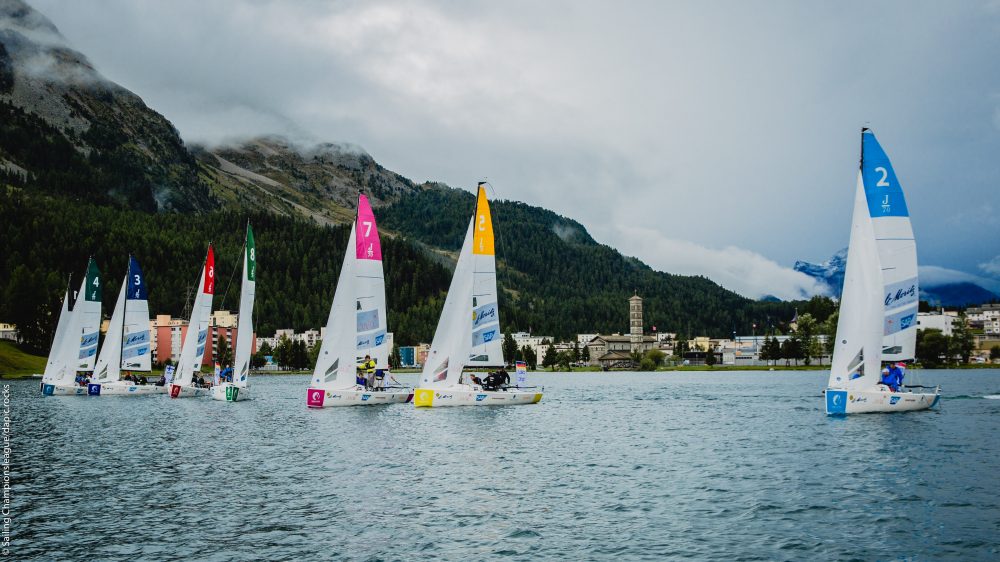 [vc_row][vc_column][vc_column_text]Unfortunately, the Swiss weather today was not on the side of the sailors and organizers. Everything was ready for a sportingly successful start to the SAILING Champions League, Act 2, in St. Moritz. But with pouring rain and capricious winds in temperatures around 10 degrees C, the organizers and 24 teams from 12 countries were forced to restart again and again. Not until the evening could the regatta have begun.

Already the second race at noon was cancelled due to timeout. What followed was a three-hour interruption. Toward 4 pm the first boats were finally allowed into the water. But after more than an hour without wind, the race committee decided to postpone today’s racing until tomorrow. And tomorrow (September 2) looks promising: with winds of seven to ten knots, excellent sailing conditions are expected. A lakeside grandstand built specially for this event will give spectators a first-hand experience of sailing against a fabulous alpine backdrop. The first race is scheduled for 9.30 am.

The SAILING Champions League
This year the best European clubs will be competing in two SAILING Champions League events (Act 1 – St. Petersburg (August) and Act 2 – St. Moritz (September) to qualify for coveted starting positions at the grand finale in Porto Cervo (September). The best sailing club in Europe will then be decided. Races will be held in fleet-race mode with boats of the J/70 one-design class.

As technology partner of the SAILING Champions League, SAP will ensure a professional and exciting live-stream. Tomorrow and on Sunday the races can be viewed live on the Internet at www.sailing-championsleague.com as of 12 noon. All results will be posted here: www.sapsailing.com.

[/vc_column_text][vc_video media_url=”https://youtu.be/QeDN4zHJ5Qs”][/vc_column][/vc_row]
previous article « Get together of Europe´s sailing elite in St. Moritz
next article Act 2 St. Moritz: Segelclub Mattsee top of the leaderboard so far »