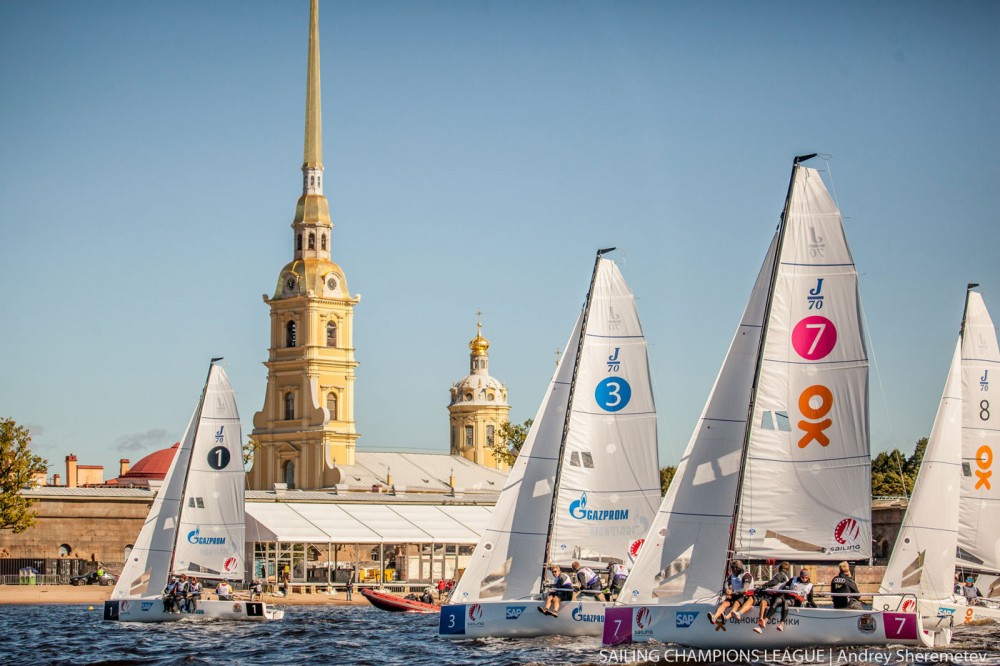 St. Petersburg laid on three days of picture-perfect international sailing for the SAILING Champions League (Act 1, 26th-28th August). Thrilling head-to-head races in front of spectacular scenery was a big treat for both sailors and spectators. In the end the Berliner Yacht-Club (Germany) held their nerve and took over the lead in their last battle with their rivals Norddeutscher Regatta Verein (Germany) who were runners-up ahead of third placed Société Nautique de Genève (Switzerland).

It was a tense battle between two German Clubs: The Berliner Yacht-Club were hard on Norddeutscher Regatta Verein´s heels from the beginning. Until the very end they never managed to get ahead of the Hamburgers. For most of this three day regatta it seemed as if the German Champions from 2013 and 2014 could not be stopped. Tides turned in the penultimate race when Berlin took the lead and secured their victory.

„We would have never expected to win here. We went to St. Petersburg to qualify for Sardinia. And then we kick off a first place here. It´s unbelievable – we´re so incredibly happy”, said Max Nickel, who is part of the Berliner winning team together with Stefan Mölle, Valentin Gebhard, and Philipp Bruns.

Thrilling live coverage thanks to technology partners SAP and SailTracks
SAP has been supporting international sail sports for many years now simplifying and explaining the complex sport of sailing. In St. Petersburg SAP supported by SailTracks broadcast most of the races live on the internet and live on site. Famous commentator Andy Rice was supported by changing co-commentators and by graphics and statistics to make the sport of sailing comprehensible for anyone.

23 Clubs from 12 nations came to St. Petersburg, to fight for one of 16 starting positions in the grand final in September in Porto Cervo. On Sardinia (23rd-25th September), it’s all about the eligible silver bowl by Robbe & Berking and the title of Europe´s best sail club.

previous article « Champagne Sailing on day two at the SAILING Champions League in St. Petersburg
next article Registration opens for all Austrian Clubs »