Champagne Sailing on day two at the SAILING Champions League in St. Petersburg 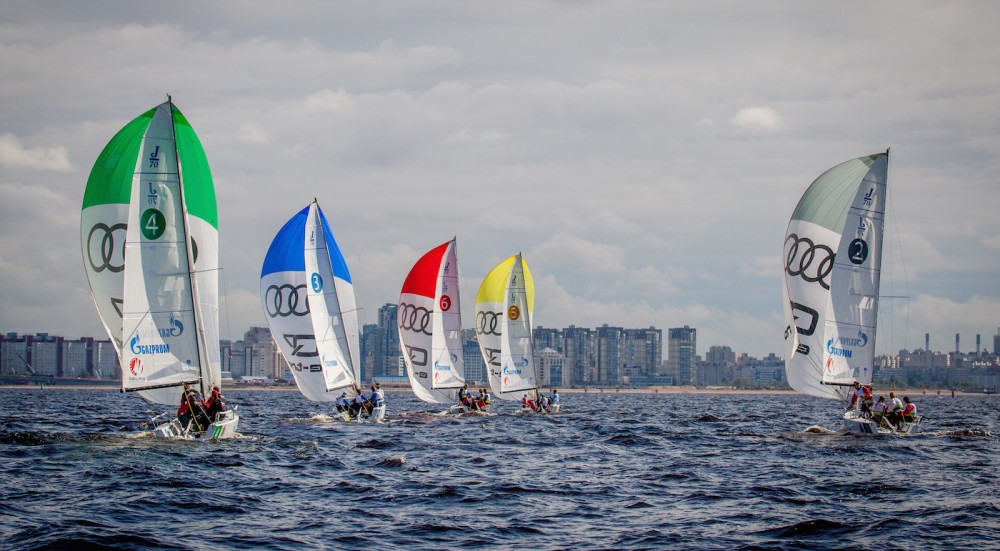 Day two for the 23 clubs from 12 nations at the SAILING Champions League in St. Petersburg was amazing. 20 knots of wind and fine sunshine spoilt both sailors and spectators. Conditions which would be expected in Porto Cervo but not in Russia. The Norddeutscher Regatta Verein (Germany) defended their lead. First runner-up is the Berliner Yacht Club (Germany), followed by the Société Nautique de Genève (Switzerland). The races continue tomorrow morning at 10 am.

Nothing seems to stop the German Champions from 2013 and 2014. Tobias Schadewaldt and his crew won three more races today and continue to lead the fleet: “We’re completley satisfied with today’s results. The Berliner Yacht Club being so close behind us proves how strong the fleet in St. Petersburg is”, claims Tobias Schadewaldt from the Norddeutscher Regatta Verein from Hamburg.

The team from the Berliner Yacht Club with helmsman Stephan Mölle is just as competitive, despite strong competition. With four wins in a row they defended their second place in the table: “It was a perfect day. Only the last race was really rough, when our jib ripped apart. Luckily the judges levelled this race, so overall we only had first places today”, says Valentin Gebhard from the Berliner Yacht Club.

The regatta had to be cancelled in the afternoon after 14 races due to strong winds of more than 30 knots. The races continue tomorrow at 10:00 am in front of the spectacular setting in central St. Petersburg. Please click here for all races and results: https://scl2016.sapsailing.com. Technology partners of SAILING Champions League, SAP und SailTracks, will provide the necessary requirements to broadcast live on Saturday and Sunday from 12 am: https://sailing-championsleague.com

Until Sunday, 23 Clubs are fighting in St. Petersburg for one of 14 starting positions in the grand final in September in Porto Cervo. On Sardinia, it’s all about the eligible silver bowl by Robbe & Berking and the title of Europe´s best sail club.