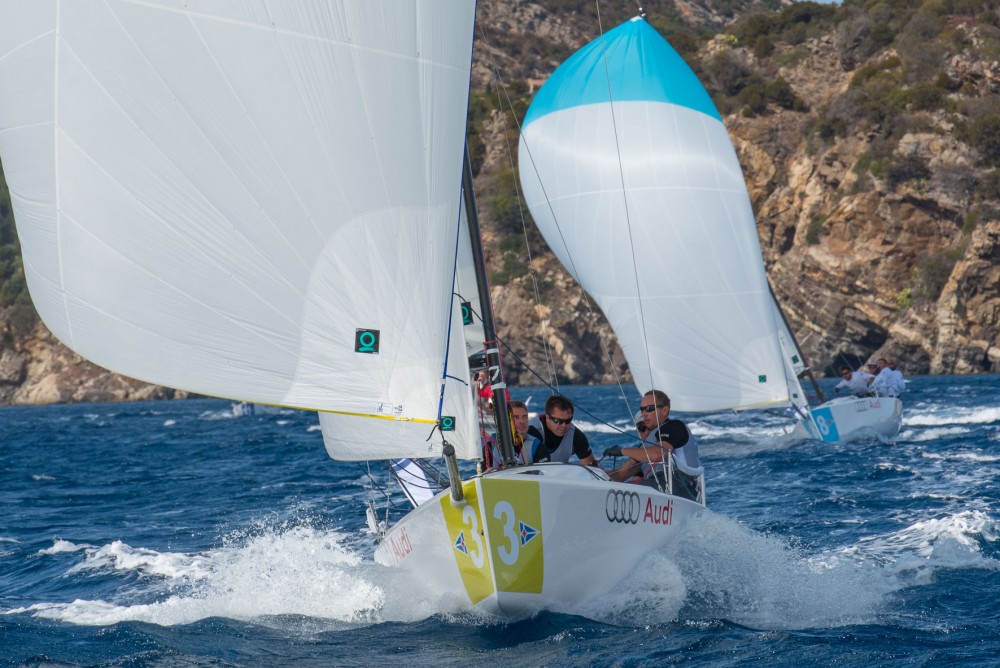 Race Day 2 was an intense one for the 30 teams com- peting in the Sailing Champions League at the Yacht Club Costa Smeralda. A lively Mistral wind once again put teams to the test over the course of 21 fleet races, bringing the total number of flights completed to 7.

The provisional rankings at the conclusion of today’s race see Norway’s Kongelig Norsk Seilforening (KNS) heading the fleet of clubs from across Europe with five victories and two wins in the seven races run. The Yacht Club Costa Smeralda team, flying the colours of the host club, follows hot on their heels with four wins. The Deutscher Touring Yacht-Club (DTYC), one of four German teams present, continues took look strong despite a sixth place in one of to- day’s races, as does Switzerland’s Société Nautique de Genève (SNG).

“It was a terrific day on the water” commented Kristoffer Spone, skipper of Kongelig Norsk Seilforening. “My guys did a great job. Maybe from outside it looks perfect but we made a lot of mistakes. Normally, we are better in light winds, so we’re excited for tomorrow. This format of league sailing is what we want to do.”

Julian Stückl, skipper of DTYC was also pleased: “It was a great day for us but tricky, as well. On the top it is very tough sailing. We know the guys from other regattas. In the league sailing it is more about manoeuvres than speed. Tomorrow we want to have fun again and do our best and try not to be too nervous.”

Racing is scheduled to continue on tomorrow’s final day of the event at 9.30 a.m. with the Race Committee determined to fit in as many flights as possible. With the possibility of each team completing a maximum of five more races, the field is still wide open. The first flight tomorrow will be part of the Bart’s Bash regatta in memory of America’s Cup skipper Andrew Simpson.

Teams will once again be enjoying the renowned hospitality of the YCCS at a Team BBQ at the Clubhouse.

Live Broadcasting starts at 11.45 a.m. on sailing-championsleague.com and will cover the ac- tion until the last race. You can get results at the SAP Live Center (championsleague2015.sapsailing.com).