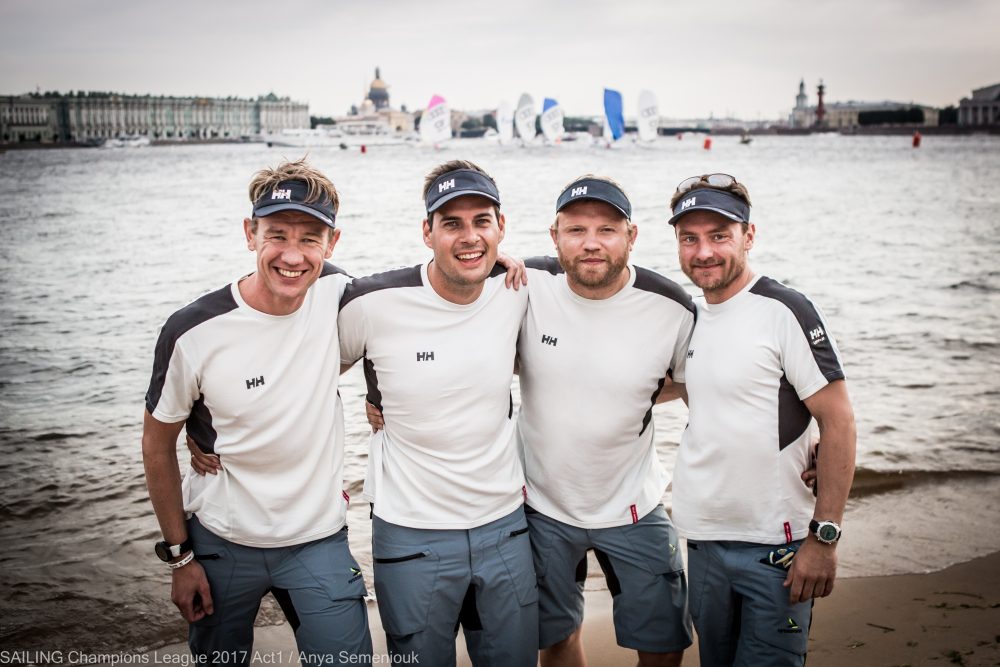 St. Petersburg, August 12th 2017. Due to ceaseless sailing Frederikshavn Sejlklub (FS) took the lead on day two of the SAILING Champions League Act 1 in St. Petersburg (August 11th– 13th 2017). Helmsman Kris Houmann: “We must admit that we were a little lucky with these currents today. But we are a well-rehearsed team and four first places today are a great result.”

First runner-up is the team Circolo Canottieri Aniene (CCA) from Italy. Helmsman Lorenzo Bressani after the race: “It sure was exhausting today. We had too many discussions about the right tactics, which unfortunately lead to mistakes.”

21 teams from all over Europe are trying to qualify for the final of the SAILING Champions League in Porto Cervo, Sardinia. The races here in St. Petersburg on the seven one-design-J70 keel boats are extremely short and close to the audience.

Today´s races started with spectacular duels and tight manoeuvres with westerly winds of 12 – 14 knots in front of the Peter and Paul fortress in St. Petersburg´s city centre.

Due to the heavy current and southerly shifting winds the race umpires had to change and shorten the course this afternoon.

Johannes Polgar, helmsman of NRV: “On these short tracks, every mistake is being punished. Unfortunately we had plenty of wind changes and the strong current on the Neva is capricious. We couldn’t  do any better today.” Polgar is still confident for day 3: “We willjust try to stay out of trouble.”

On Sunday, August 13th, the qualifying races in St. Petersburg will continue at 10:30 am.

For three days the best clubs of the national sailing leagues are fighting to qualify for the final of the SAILING Champions League in Porto Cervo, Italy.

The best teams from Act 1 and 2 will compete for the title “Best European Sailclub” and the eligible silver champions´ bowl by Robbe & Berking.

SAP, the technological partner of the SAILING Champions League, will provide audience and viewers with a professional and thrilling livestream. The races will be shown live in the Internet on Saturday and Sunday starting at noon: www.sailing-championsleague.com. Several sailing experts and a host will guide the audience through the program and explain the fascinating sport of sailing to everyone. All the results can be found here: www.sapsailing.com

ACT 1: St. Petersburg hosts the first event of the international championships of the best sailing Clubs from August 11th – 13. 2017. The first group of the best teams of the national sailing league is fighting to qualify for the SAILING Champions League´s final.

Final: The best 13 teams from the qualifying events in St. Petersburg and St. Moritz will meet in the final in Porto Cervo, Italy, September 22nd – 24th. They will be joined by the hosts, Yacht Club Costa Smeralda and the defending champions, the German Touring Yacht-Club (DTYC). These 28 teams will fight for the title of Euorpe´s best sailing club and the eligible silver champions´ bowl by Robbe & Berking.