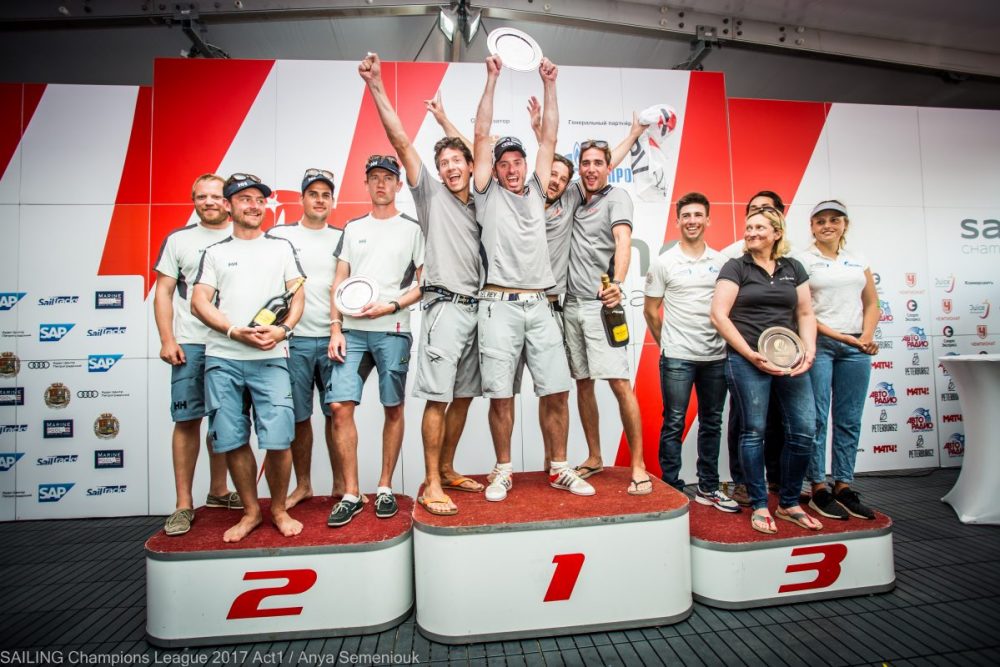 A thrilling climax saw the regatta come down to the final race to decide Act 1 of the SAILING Champions League (11.- 13.8.2017). The Norddeutscher Regatta Verein (NRV) from Hamburg won the decisive race in St. Petersburg.

The NRV managed to handle the difficult conditions best with shifty, weak winds on the Neva river in the city centre of St. Petersburg. On Sunday, the north Germans won four out of three qualifying races and managed to keep up their performance from the previous days.

“We were of course hoping to reach the podium. During the qualifying races we became more and more relaxed and stayed confident even in these difficult currents”, says helmsman Johannes Polgar.

With this victory during the SAILING Champions League in St. Petersburg Johannes Polgar proved that he is still fully motivated to work on his 2020 Olympic campaign.

The Frederikshavn Sejlklub (FS) from Denmark lost their overnight lead to the NRV. Helmsman Kris Houmann: “In the decisive race unfortunately the NRV overtook us and due to the wind shifts we could not control them anymore. We are still very happy with second place and are looking forward to come to St. Petersburg again.” At the end of August Frederikshavn Sejlklub will participate in the Nord Stream Race from Kiel to St. Petersburg.

The last race of the event was extremely thrilling as the hosts from Saint Petersburg Yacht Club (SPBYC) sealed the final podium spot: “It was an incredible race. After our terrible start I never thought we would win this race. A huge thanks to my wonderful team”, explains Anna Basalkina, helmsman from Saint Petersburg Yacht Club relieved. The Russian Olympic sailor from 2000 in Sydney surely deserved to reach third place overall and save a place on the podium.

21 teams from all over Europe were trying to qualify for the final of the SAILING Champions League in Porto Cervo, Sardinia. The races here in St. Petersburg on the seven one-design-J70 keel boats were extremely short and close to the audience.

All the results can be found here: www.scl2017.sapsailing.com SAP, the technological partner of the SAILING Champions League, has provided audience and viewers with a professional and thrilling livestream.

The SAILING Champions League will continue in September in Switzerland:

In Porto Cervo the best teams from Act 1 and Act 2 will fight for the title “best European sail club” and for the eligible silver bowl by Robbe and Berking.

Final: The best 13 teams from the qualifying events in St. Petersburg and St. Moritz will meet in the final in Porto Cervo, Italy, September 22nd – 24th. They will be joined by the hosts, Yacht Club Costa Smeralda and the defending champions, the Deutscher Touring Yacht-Club (DTYC). These 28 teams will fight for the title of Euorpe´s best sailing club and the eligible silver champions´ bowl by Robbe & Berking.