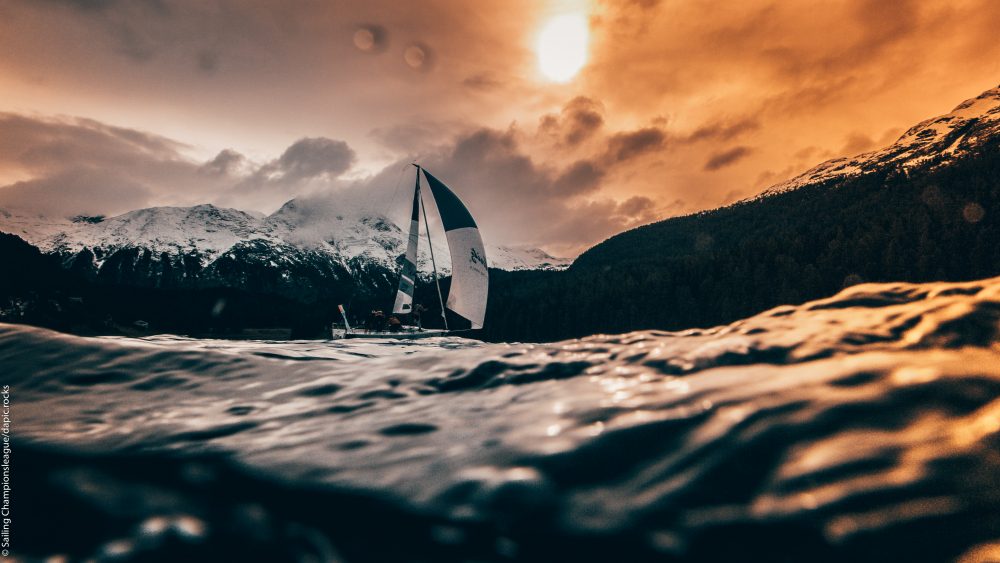 24 sailing teams from 12 nations have defied freezing temperatures and weak wind conditions in 24 exciting races in front of a fabulous alpine backdrop. On the third and last day of the SAILING Champions League Act 2 in St. Moritz (September 1 to 3, 2017) Segelclub Mattsee from Austria defended its lead to finish as top of the league. Second was Hellerup Sejlklub of Denmark, followed by the Seglerhaus am Wannsee from Germany in third place.

In light and shifty winds the team from Mattsee upheld good rankings over the entire weekend on the Lake of St. Moritz. In particular the relatively low weight of this crew of four (Stefan Scharnagl, Anna Scharnagl, Lisa Leimgruber and Hanna Ziegler) paid off under such wind conditions.

“We are overjoyed to have defended our lead of yesterday. We certainly didn’t expect this victory, and are of course very happy about it“, says helmsman Stefan Scharnagl. The coveted trophy from the presenting partner Juvia was handed over by Judith Dommermuth, founder and proprietor of this renowned fashion brand.

With this overall win in Act 2 of the SAILING Champions League in St. Moritz, Red Bull Youth-America’s Cup helmsman Stefan Scharnagl and his team demonstrated their potential. At the Grand Finale in Porto Cervo on September 22-24 they aim to confirm it by winning the “Best Sailing Club“ trophy.

Hellerup Sejlklub from Denmark again put pressure on the club from Mattsee this last racing day with three wins out of four races. But that was still not enough to overtake the Austrians. In the end this team had to make do with second place. Runner up in third place after a wonderful third day of racing was the German team, Seglerhaus am Wannsee, who won two of the last three races to gain a place on the podium.

In these short close-to-the-audience races held in front of the fabulous alpine backdrop on the St. Moritzersee, each between eight J/70 one-class keelboats, 24 teams from all over Europe competed to take part in the SAILING Champions League-Finale in Porto Cervo, Sardinia. The best 16 teams in St. Moritz are qualified. They include two German teams (Seglerhaus am Wannsee and Lindauer Seglerclub) and a Swiss team (Societe Nautique de Geneve).

previous article « Act 2 St. Moritz: Segelclub Mattsee top of the leaderboard so far
next article Who will be Europe ́s “Best Sailing Club”? »