SCL in Saint Petersburg
St. Petersburg Yacht Club is part of SAILING Champions League since 2016 and hosts Semifinal 2 on river Nieva in the iconic historical heart of St. Petersburg. The sailing conditions in the city centre with lots of wind shifts and strong current make this semifinal the most difficult place to win at. Racing in front of the historical background of the previous Emperor’s capital delivers a fascinating feeling for once in a life time experience. 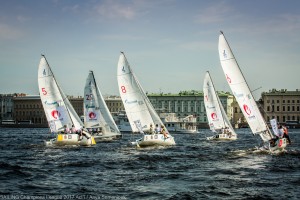 The City
St. Petersburg is the former Russian capital whose mysterious White Nights and winding canals inspired such literary giants as Fyodor Dostoevsky and Nikolai Gogol. Constructed from scratch out of marshland in 1703 by Peter the Great, St. Petersburg has seen more revolution, war and political intrigue in its 350 years than other cities witness in a millennium. This history is apparent at every turn. Nowadays this is one of the largest European cities where history is combined with modern. Besides, St. Petersburg is the unofficial sailing capital of Russia.

Saint Petersburg Yacht Club
The regional public sport organization Saint Petersburg Yacht Club was established in 2007. Its main mission is to maintain the ideals of maritime culture on land and on sea and to develop nautical sports, as well as to grow enthusiasm for sailing. The Yacht Club’s philosophy is based not only on necessity to preserve but also on a commitment to transfer to future generations the Russian nautical cultural heritage, along with Russian and world maritime history.