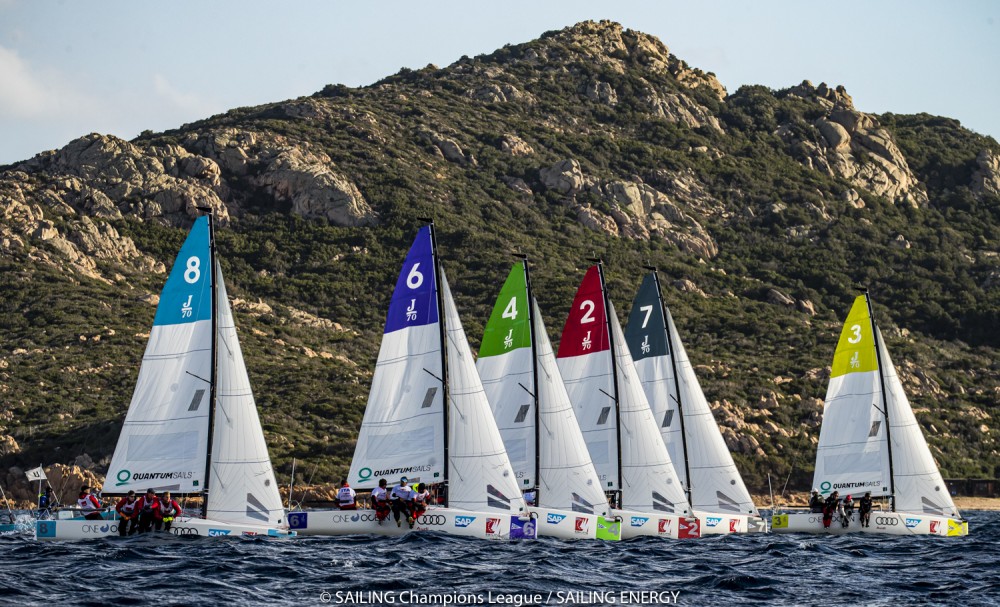 Porto Cervo, October 15, 2020. Today was the first day of racing at the Audi SAILING Champions League, an event that is organized by the Yacht Club Costa Smeralda with the support of Title Sponsor Audi and main partner One Ocean Foundation. Two flights were completed today for a total 8 races run. Currently tied for points and in the lead we have Norddeutscher Regatta Verein and Åländska Segelsällskapet from Finland. Third place for the Swiss team Seglervereinigung Kreuzlingen.

The briefing was held in the late morning in Piazza Azzurra, after which the 27 participating teams prepared to sail. The Race Committee started races at about 2 PM in shifty and unstable conditions with wind from the north-north west that ranged from 18 to 22 knots.

But the teams were ready for the fight and gave it their all in the waters off the Golfo del Pevero. The Germans from the Norddeutscher Regatta Verein team and the Finnish team from Åländska Segelsällskapet are currently tied for the lead both teams finished first in today’s two flights. The Swiss team from Seglervereinigung Kreuzlingen finished third in the days initial flight and won the second and are currently in third place overall.

Måns Lundberg, from Åländska Segelsällskapet commented: “Racing in Costa Smeralda is always great for us! Our primary objective is to better the best result that our Club has obtained in the past editions of this event.”

Stefan Seger, from the Regattaclub Oberhofen said: “On this first day the wind direction was very shifty so it was hard for all of the teams that are participating. At any rate it’s always a pleasure to meet again here.”

Tomorrow, October 16th racing is scheduled to begin at 10 AM in westerly wind forecast to be at 20 knots.