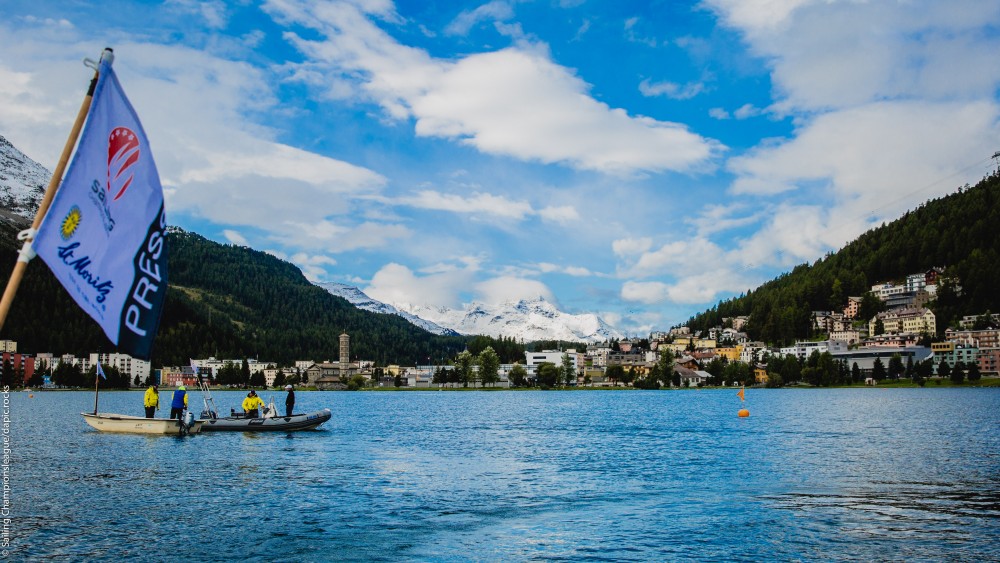 Thirty-two of the world’s best sailing clubs representing twelve nations are set to fight for the prestigious silver trophy in the SAILING Champions League Final 2018, due to take place in St Moritz on 30 August to 2 September. Whoever ends up earning the title of “Best Sailing Club of the Year” will quite literally feel on top of the world, as the winning crew will be celebrating on top of a podium that stands 1,856 metres above sea level, on the shores of Lake St Moritz.

The host club of Sailing Club St Moritz has been working closely with the city of St Moritz and the region Graubünden to make sure that this gathering of international talent is given a world-class reception in this beautiful corner of Switzerland, high up in the Alps. The 32 clubs that have made it to the Final qualified through highly competitive Semifinals, the first held in the warm winds of Porto Cervo back in June, the second in St Petersburg when the Russian city put on some very strong and challenging winds.

Quite what conditions will meet the competitors in St Moritz is anybody’s guess; it could be cold and light airs like last year’s event, or St Moritz could show its other side with warm, strong breezes as the predominant theme. Whatever St Moritz sends their way, the best sailors are those that are most adaptable to changing conditions in 15 flights of eight identically-prepared one-design sportsboats.

Winner to be determined in new Final Series
This year’s Final will be the first time for running a four-boat Final Series which was successfully trialled a month ago in Travemünde at the inaugural Youth SAILING Champions League. The top four boats from the Qualifying stage go through to the Final Series, carrying forward their ranking from Qualifying as a single race score. So, the winner of Qualifying would carry through a race win, the runner-up would carry through two points, and so on. In the Final Series, the teams will race against each other until one team has won two races. If the winner of Qualifying wins the first race of the Final Series, they become the outright winner of the SAILING Champions League 2018. On the other hand, the maximum number of races that could take place is four, if the race wins have been evenly distributed across all four teams.

The aim of the format is to provide more of a climax for the spectators whilst retaining a format that is fair to those who have performed consistently over the previous days of competition. Emil Kjaer, helmsman of Kongelig Dansk Yachtklub, runner-up at Youth SAILING Champions League, commented: “The new format makes the event really exciting for the spectators and for us sailors. We like to sail under pressure.”

Martin Berthod, Director of St Moritz Tourism, welcomes the sailors and visitors: “This event is an absolute high point of the year. For those that haven’t visited us before, I think St Moritz will take their breath away, and not just because the air is thinner up here! We believe it’s a spectacular place to stage the big SAILING Champions League Final. Thanks to the legendary Maloja winds, St Moritz and the Upper Engadine have become world-renowned sailing destinations. Furthermore, I would like to extend a special thanks to our sponsors and partners, without whose support this event would not be possible.”

Livestream and results by SAP
As with all SAILING Champions League events, the final two days of racing on Saturday and Sunday will be live broadcasted by SAP from 12:00 hrs (UTC+2), with expert commentators providing blow-by-blow analysis of the racing, aided by the detail provided by SAP Sailing Analytics. The final races are schedules for Sunday, 14:00 hrs (UTC+2). The SAP Sailing Analytics provide 24/7 additional statistics and data for sailors, fans, spectators and media like GPS tracking, real-time analysis, live leaderboard combined with 2D visualisation. You find all results on sapsailing.com!

You can follow the action on Saturday here: youtube.com/watch?v=_6P2cLd3J-o

You can follow the action on Sunday here: youtube.com/watch?v=4IctaNYsZCk

previous article « Our Sponsors of the Final in St. Moritz Part 2
next article Great Media Response on the Final so Far »