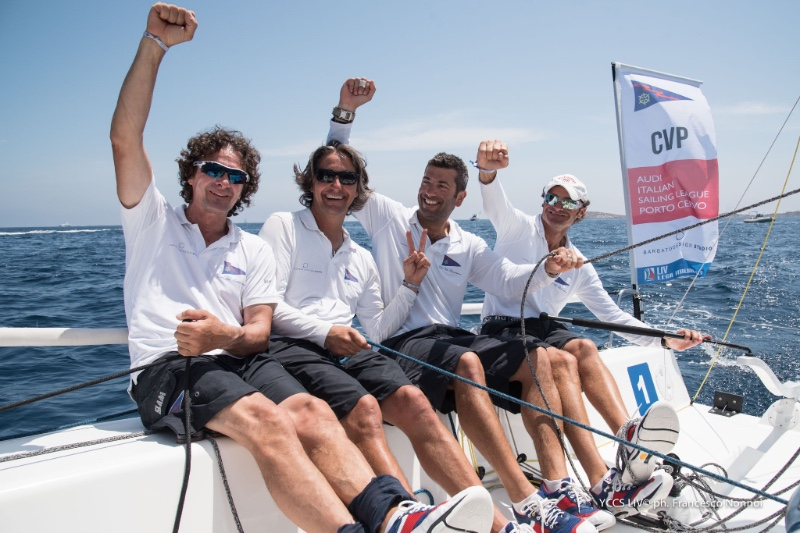 “Club Vela Portocivitanova” won the Audi Italian Sailing League, second qualification series of the Lega Italiana Vela in Porto Cervo. During the last day of races the team of “Club Vela Portocivitanova” made up by Alessandro Battistelli, Alessio Marinelli, Gabriele Giardini and Sandro Iesari reconfirmed its high performance: thanks to a perfect conduction and tactics the team closed the qualification series with 62 points outcome of seven first places, four second places, three third places and a fourth place.

Second place in the final ranking list for the “Marina Militare”: during this last day it had a race more to sail therefore it took adavantge of this by better managing its points. Excellent performance of the “Yacht Club Adriaco”, which closed in the third place, with one point difference from the second, by winning two of the the four last races. A second to last place in the 24th race set back the “Aeronautica Militare” that closed fourth but still qualified itself for the finals in October together with the “Reale Yacht Club Canottieri Savoia Napoli”, fitfth in final ranking list.

The five teams who qualified for the finals today sum to the five who qualified in Salò (“Società Velica di Barcola e Grignano”, “Circolo Canottieri Aniene”, “Società Canottieri Garda Salò”, “Circolo Vela Gargnano e Circolo Velico Ravennate”). The ones that will qualify after the last qualification series on the first weekend of October in Cala Galera at the Club Nautico Argentario will complete the list. At the end of October the best teams of the Lega Italiana Vela will participate in Naples to the final organized by the “Reale Circolo Canottieri Savoia”.

The President of the Lega Italiana Vela, Roberto Emanuele de Felice, underlines the great result achieved by the teams: “Once again we witnessed an important wonder in the regattas of the Legavela: the most coordinated, most close-knit team wins, the one that lives deeply the team spirit of these races. Experience, coordination and resolution are the main ingredients in order to make the difference in the Lega Italiana Vela and the “Club Vela Portocivitanova” gave a great lesson to everybody by performing its participation in this event in the best way possible”.

Il Commodoro dello Yacht Club Costa Smeralda, Riccardo Bonadeo declares: “During these three days of this first event organized together with the LIV we had very fast and highly technical races of great sport value. In particular we are very proud of organizing sailing events that promote sailing at a club level by spreading out the culture of this sport together with its peculiar values: commitment, teamwork and sportsmanship. Beside the teams I thank our sponsor Audi that since years supports our activities and that in this event offered us a wonderful party”.