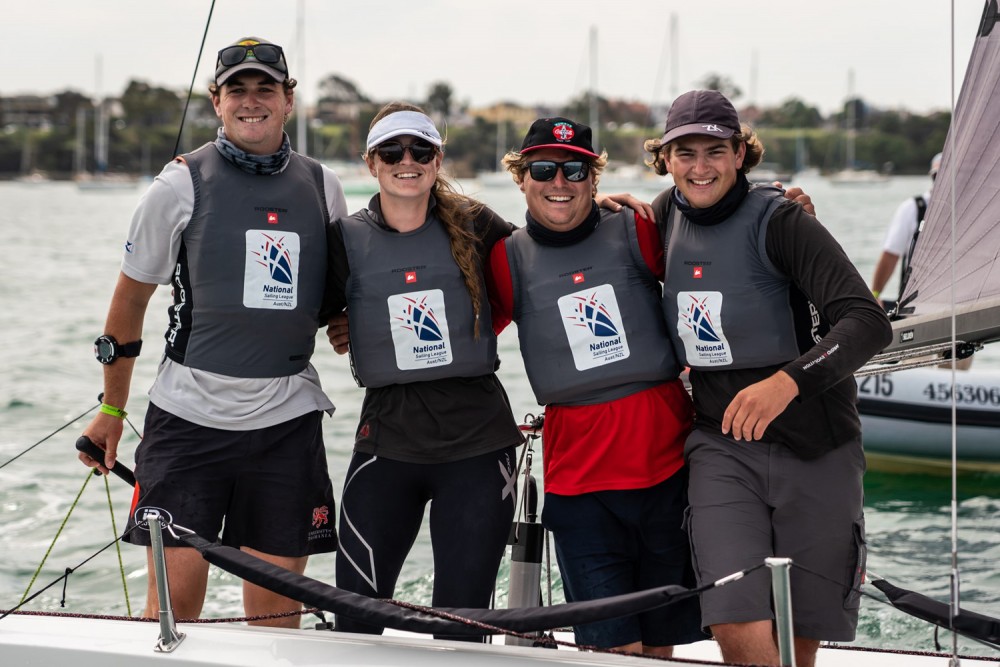 Derwent Sailing Squadron/Sandy Bay Sailing Club’s two teams joined South Australia’s Brighton & Seacliff Yacht Club (BSYC) and Royal Brighton Yacht Club (RBYC) from across the bay for the first to two points final on Monday January 27, 2020 in the best breeze of the series. DSS/SBSC’s youth team skippered by Will Sargent carried a point advantage into the final and looked red hot to go all the way, but their savvy older clubmates had other ideas, evening the score with a bullet in the opening race. RBYC 1’s turn came in race 2 and then Brighton & Seacliff’s team, skippered by Alex Higgins who is well known in 420s, made a late charge, winning race 3 to set up a sudden death fourth and final race.

In gusty then light and tricky sou’east breezes for the last downwind leg BSYC owned race 4 until the finish line. The pair crossed side-by-side and all eyes went to the committee boat to call the photo finish. DSS/SSCC 2 (Burnell) had scooped the win over BSYC by centimetres and seconds.

The winning team say they are happy to return to Tasmania and rally more clubs for the next SAILING Champions League – Asia Pacific event. “It’s been fantastic, a lot of friends from Geelong and Tassie who are here at the Festival of Sails are interested. I think it’s going to grow; the concept is good, especially for us younger guys. We’ll happily spread the word back home,” Burnell added.

RSYS is the current SAILING Champions League world titleholder after their representative team travelled to St Moritz last August and beat the seasoned Europeans, a surprise result given it was Oceania’s first year of league competition.

Full results for the qualifying races and final series here.

The next event on the SCL – Asia Pacific calendar is the Northern Qualifier Hunters Hill Sailing Club will host 15 to 16 March followed by the first SCL – Asia Pacific Women’s & Youth Regatta, an invitational event at Newcastle Cruising Yacht Club over the weekend of 21 to 22 March, 2020.