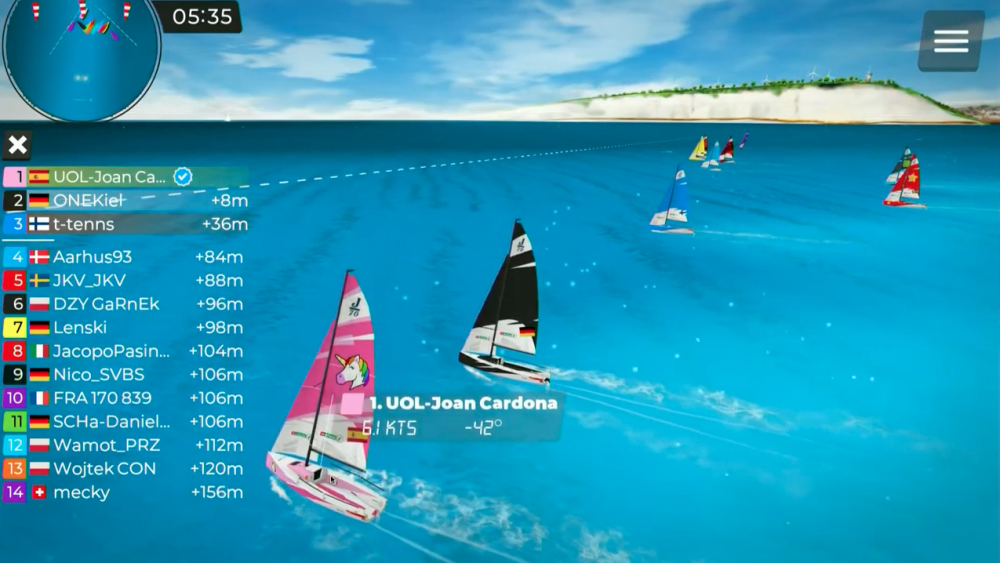 Today’s race of the eSAILING Champions League powered by BAY has been moved to Fécamps in France. With about 20 knots from the northeast, the wind conditions were optimal.
After 5 races in each of the 4 groups the last 16 places for the final are fixed:

“I am so 100% on fire. I did not expect this at all” Philipp Mann from ONEKiel, Germany, is thrilled. “I ignored the results – even in the race, turned on my playlist and did my best. In one race I didn’t want to battle with Joan Cardona (World Champion), but preferred to bring 2nd place home safely. I didn’t expect it at all and I’m all the prouder now!”

It’s not easy to keep up with the pace of a world champion and it requires a lot of training: “Two hours a day for three months, additionally a lot of team race to understand the rules of the game and I’m also trying to play one or two individual events a week”. That pays off – Joan Cardona became first in his group of the 3rd Qualifier of the eSCL powered by BAY.

The race was broadcast live by SailTracks and commented by Ole Studnitz, Till Krüger and Oliver Schwall. In replay it can be watched on Youtube and Facebook. The final will also be broadcasted live again. It starts on April 11 at 2PM.

Congratulations to all the 48 finalists and Happy Easter to everyone!