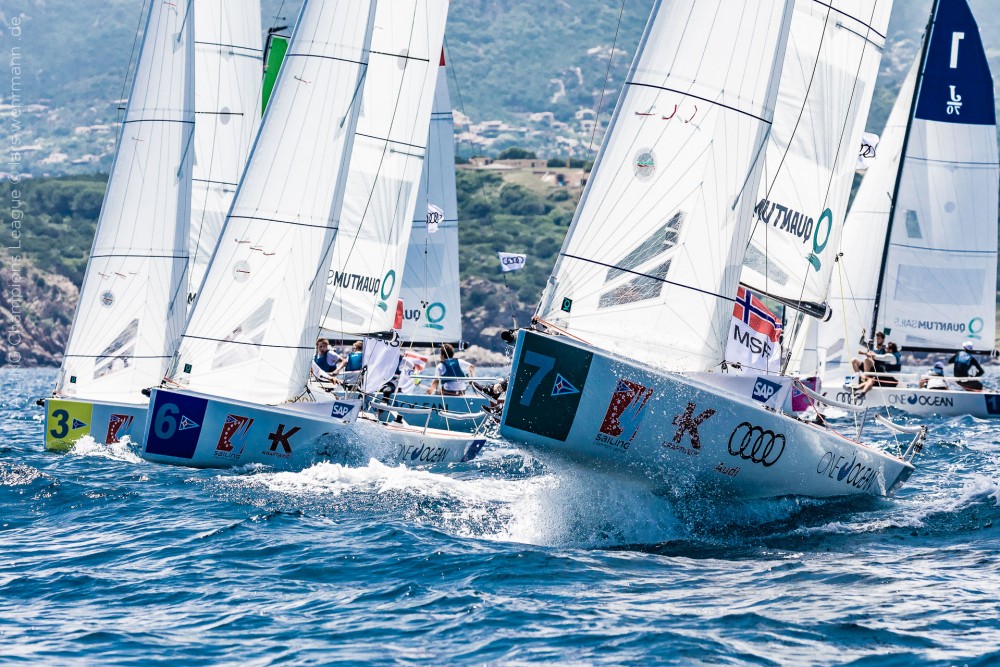 Teams from 22 clubs representing 13 nations were battling over four intense days of competition at Semifinal 1 of SAILING Champions League (SCL) in Porto Cervo for a ticket to the SAILING Champions League Final in St. Moritz coming up at the end of August. The first 14 sailing clubs qualified in Sardinia for the final event in Switzerland. The Italian yacht club, Circolo della Vela Bari, has won the opening round organised by Yacht Club Costa Smeralda with the support of title sponsor Audi, after a commanding performance in Sardinia. In the beginning of August, 16 other sailing clubs qualify at Semifinal 2 in St. Petersburg, Russia, to complete the list of 32 participants besides host club Segel-Club St. Moritz and SCL Champion Yacht Club Costa Smeralda.

Excellent starting skills and clear-headed tactical racing delivered victory for the crew representing Circolo della Vela Bari (CVB), one of two Italian teams competing on the sparkling waters of the Costa Smeralda. Simone Ferrarese’s team went into the final day just in front of Austrian rivals Yacht Club Bregenz, with Club de Voile Saint-Aubin Elbeuf also well in contention. However, neither the Austrians nor French could match the blinding consistency of the CVB crew who won all three of their races on the final day to win the 22-team contest with a race to spare.

Ferrarese was delighted to win in such dominant fashion: “We had an amazing day today. It’s great to come out with a race victory and it’s fantastic to win in Italian waters! We love Porto Cervo and we love this event. It was tough until the end, especially in our last race to keep our eyes on the French team from Club de Voile Saint-Aubin Elbeuf who was our direct rival. Thanks to my crew, they did an amazing job.”

Although they may not have won in Porto Cervo, the Austrians were still very satisfied with second overall. Compared with the Mediterranean heat of Northern Sardinia, skipper Max Trippolt will perhaps enjoy the cooler climes of Switzerland in just under three months from now. “Sailing so many races in four days, the sun in Sardinia kills your brain and keeping the concentration up is not easy at all, so we’re very happy to have qualified for the SAILING Champions League Final. But the competition is going to be even harder in St. Moritz when the best clubs from the semifinals come together. We’ll give our best and see what’s possible.”

Aside from winning the event, the other battle in the middle of the fleet was to secure one of the 14 places available for the final in St. Moritz. APCC Nantes sailed well in their final heat to take second place behind the winners from CVB, the French doing enough to secure qualification for Switzerland. Last of the qualifiers was Jachtclub Scheveningen from the Netherlands, with their Dutch compatriots WSV Giesbeek finishing just one place and three points behind, but meaning they just missed out on a ticket to St Moritz.

The Yacht Club Costa Smeralda (YCCS) ran an exemplary regatta, proving why this venue continues to be one of the most clear choices for hosting world-class sailing contests. YCCS Commodore, Riccardo Bonadeo, commented: “The club became famous for hosting Maxi yachts but we also want to welcome the young sailors to compete at events like SAILING Champions League. We are happy that this new challenge for the club is achieving great results for sailing. We make every effort to create the same spirit of sport for young people in the smaller boats – because this is the future of our sport.”

The YCCS regatta was the first of two semifinals, with the second semifinal due to be hosted by St. Petersburg Yacht Club in Russia from 3 to 6 August, just a few weeks before the 2018 Final which will be hosted for the first time by Segel-Club St. Moritz, high up in the Swiss Alps from 30 August to 2 September.

Live broadcasting by SAP
Did you miss the races of SAILING Champions League? Just visit sapsailing.com and click through the SAP Sailing Analytics for replays of all races and different and interesting statistics about the action on water.

The qualified clubs for the Final in St. Moritz (in order of the overall result):