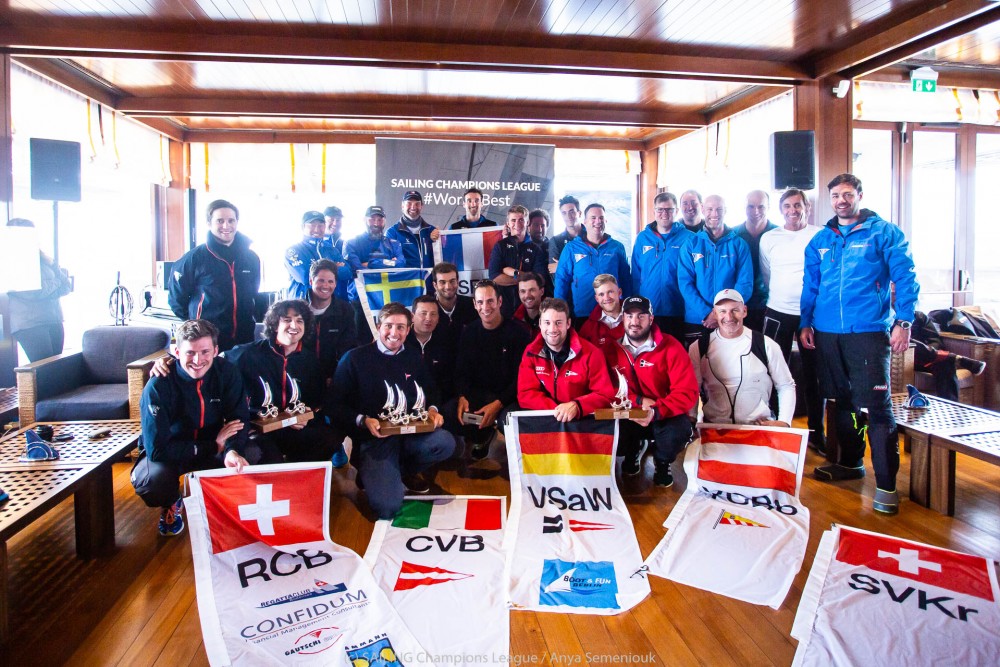 Circolo della Vela Bari from Italy has won the second Qualifier of the 2019 season of the SAILING Champions League hosted by Yacht Club Costa Smeralda after an almost impeccable display of sportsboat tactics in Porto Cervo, Sardinia (23 to 26 May 2019). The top seven finishing clubs from Italy, Switzerland, Germany, Sweden, France and Austria earned their place for the Final in St Moritz later this summer.

Out on the water, the 24 clubs enjoyed a variety of sailing conditions – windy on day one, light airs on day two, and moderate breeze for day three. Unfortunately a big storm over Sardinia brought rain and more than 25 knots of wind for Sunday, and the final races were unable to take place. However, the sailors from 16 nations had plenty of champagne sailing to enjoy over the previous three days.

Last August in St Moritz, helmsman Simone Ferrarese along with Valerio Galati, Leonardo Dinelli and Corrado Capece Minutolo, won the 2018 edition of the SAILING Champions League. The crew representing Circolo della Vela Bari returned to league competition in fine style, winning the Qualifier in Porto Cervo and securing their place at this summer’s final which again is set to take place in St Moritz from 15 to 18 August.

Ferrarese, taking time out of his 49er campaign to represent Italy at the Tokyo 2020 Olympic Games, was delighted to have won in Italian waters: “The racing was incredibly close. I have never seen so many boats going around the windward mark at the same time. There were lots of penalties and lots of place changing but we managed to come through and do well in most of the races.”

Just over a month from now, the third and final Qualifier is set to take place in St Petersburg, Russia, from 4 to 7 July, when the last six clubs will earn their place at the final.

Aside from the hot competition on the water, this year’s event was also aimed at drawing attention to the work of the One Ocean Foundation, which is supported by Audi as Main Partner.

Founded in 2017 with Princess Zahra Aga Khan as President and YCCS Commodore Riccardo Bonadeo as Vice president, the One Ocean Foundation’s mission is to promote safeguarding of the marine environment through a series of projects whose aim is to increase awareness among international leaders, institutions, companies and the public about the Blue Economy and a greater culture of sustainability

Results by SAP
The SAP Sailing Analytics provide 24/7 additional statistics and data for sailors, fans, spectators and media like GPS tracking, real-time analysis, live leaderboard combined with 2D visualisation. You can look back through the races and find all the results on sapsailing.com.