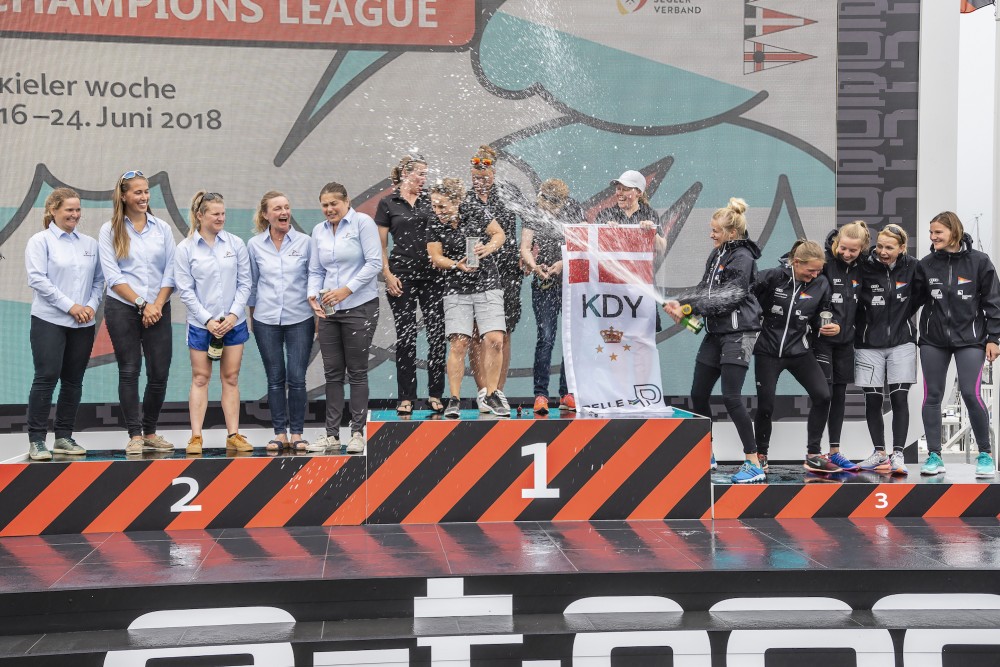 It’s the first time an event in the Women’s SAILING Champions League has ever taken place, and Kieler Woche in northern Germany was the venue. With 10 teams from six nations, the Royal Danish Yacht Club and Hellerup Sejlklub made it a one-two victory for Denmark. Kongelig Dansk Yachtclub, aka the Royal Danish Yacht Club, has won the inaugural event of the brand-new Women’s SAILING Champions League. Over the three days of the regatta which took place from 16 to18 June during Kieler Woche, two Danish crews dominated the league racing in J/70 keelboats. There were all kinds of weather conditions over the three days but the final day saw spectacular conditions with a south-westerly breeze blowing at 11 to 13 knots.

Each team competed in 20 races across the three days, and the Royal Danish Yacht Club rarely finished out of the top two in any race. Strangely, the final heat proved to be their worst score, although that 4th place didn’t matter because the crew with helmswoman Henriette Koch, Anne-Sofie Munk-Hansen, Tina Schmidt Gramkov, Helle Ørum Ryhding and Lotte Meldgaard Pedersen had already notched up a commanding lead in the standings. Koch, who represented Denmark at the London 2012 Olympic Games, commented: “I think it’s a pleasure we’re starting a new tradition – a new way of sailing. It’s great to be the winning team in the first event. On top of that I think it’s brilliant to finally have a women’s sailing championship!”

Hellerup Sejlklub finished in second place. Both Danish teams were some way ahead of the chasing pack who were focused on who would grab the final podium place going into the last heat of the competition. A first place gave Akademischer Segelverein Warnemünde third place overall, just one point ahead of fellow German team from Deutscher Touring Yacht- Club who finished on equal points with Dutch entry International Yacht Club Amsterdam..

Nynne Desirée Ammundsen from ISLA (International Sailing League Association) said: “It’s been a blast! Following 50 competitive women in 10 teams from different nations sailing in Kiel is a really good start. This is only the beginning. We have established a strong base and a solid foundation to make sure the Women’s SAILING Champions League concept goes from strength to strength. Having sailors from different nations, classes, levels and ages is exactly what ISLA is working towards, ’developing the league format’. It’s great to see sailors respond so positively to this format.”

Did you miss the races of Women’s SAILING Champions League? Just visit sapsailing.com and click through the SAP Sailing Analytics for replays of all races and different and interesting statistics about the action on water. You find the overall results on sapsailing.com!