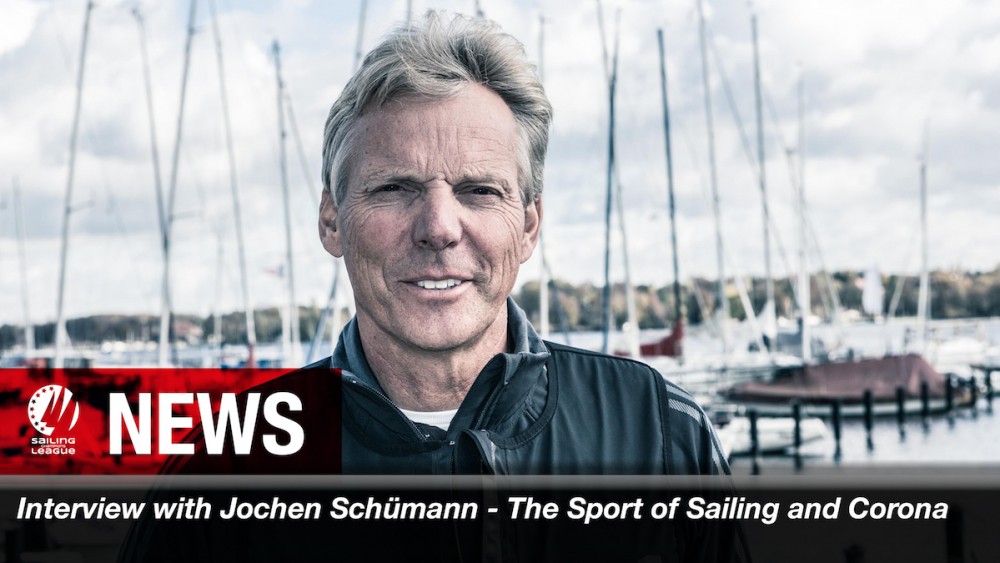 Three-time Olympic champion, two-time America’s Cup winner and co-founder of the German Sailing League (Deutsche Segel-Bundesliga) – Jochen Schümann’s interview with the German sailing magazine Segler-Zeitung about the sport of sailing in times of Corona, the 66-year-old also comments on the Olympics in 2021 and the importance of league sailing for the sport:

Jochen, you are still an active sailor today: What excites you about sailing?

Sailing is simply a fantastic sport in nature and has countless facets. It ranges from recreational sailing to kite surfing to big boat sailing. Compared to other sports, it is not clear what constitutes sailing – it can be something very individual for each sailor. As a result, a wide variety of people find their way into the sailing world. I’ve met a lot of great people through sailing and made a lot of close friends.

Would you say that sailing has changed in recent years?

Technology plays a big, if not too big, role. Comparable to Formula 1, sailing also seems to be gradually becoming a competition of engineers. However, the focus should still be on people – and thus on competition between people rather than technologies.

This year, the Corona pandemic has also caused many changes in the world. What impact had that on sailing?

All the top events that unite the sailing world were canceled or postponed – including the Olympics. However, the spectator issue that many sports face is practically absent in sailing. The high number of participants is the difficulty. On the water, of course, it is a smaller problem. Even if sometimes more than a hundred boats participate in a regatta, you have distance and fresh air between you and your fellow competitors. In the harbor, however, we all meet again and are subject to the same restrictions as in other sports.

As a former Olympic sailor, can you relate to what the Olympians are going through this year?

The ability to plan for the athletes has been completely lost this year – but this is essential, especially in professional sailing. It wasn’t clear what timing and what annual highlight you were working towards. This makes goal-oriented sport almost impossible. If you want to be successful at the Olympics, you have to prepare intensively for four years. The pandemic has shaken up this planning quite a bit – and to varying degrees in different regions of the world. Unfortunately, planning for next year is also still fraught with a lot of question marks.

Now the Olympic Games are on the regatta calendar for 2021. Do you see medal hopes among the German participants?

At the last Games in Rio, Erik Heil and Thomas Plößel won the bronze medal in the 49er – that was a super success for sailing Germany. The team is still among the international top – from my point of view real medal candidates. Philipp Buhl has proven, not least through his world championship title at the beginning of this year, that he can be the best Laser sailor in the world. Tina Lutz and Susann Beucke in the 49er FX are also extremely strong and without question have chances of winning a medal.

As a co-partner of Konzeptwerft Holding GmbH together with the team around Oliver Schwall you are co-founder of the Deutsche Segel-Bundesliga (DSBL) and in the beginning you even competed yourself for your club Yacht Club Berlin Grünau. How has the DSBL developed since its inception and what significance does it have for German sailing today?

When we founded the DSBL, we wanted to create something that would promote club sailing. Today it is a platform for strong competition between the clubs. Young and ambitious performance sailors, who are not necessarily working towards the Olympics because they have to prioritize their job, studies or school, have the chance to train in their clubs with less effort and to compete with the best in the country.

The league is also a great format for mixed teams. A healthy mix makes for a super performing team in the end. The fact that young and experienced sailors, as well as women and men, can compete together on one boat not only fits our times, but also the structures in the clubs. This can be seen well in the increasing quota of women in the league.

The league also removes an immense barrier to entry into sailing: owning a boat. The equipment of all teams is identical and the boats for the regattas are provided by the organizers – costly material optimizations of sails, hulls and masts are eliminated.

The Bundesliga has filled a big gap, which makes it attractive for clubs. It is just the right thing for clubs and especially for ambitious young sailors.

There is probably more written about the Segel-Bundesliga in the local and regional media than about any other regatta. What do you think makes the league so successful?

Local patriotism certainly ensures, as with other sports, that the media like to report on the clubs. The league has a table with promotion and relegation, first and second division teams, and it is contested on matchdays. The comparability to soccer is intentional and makes it very accessible to a broad public. The whole system of club competition is very similar to other sports – and by now all over Europe and beyond. The concept has spread quite quickly and has been implemented in 21 countries to date. The best clubs of each league meet in the SAILING Champions League – a great honor and at the same time a challenge for the sailors.

Despite a successful start to the season and exciting matchdays this year, the DSBL was not spared the Corona pandemic. What was different this Corona season than usual?

This year it has become more obvious than ever how much competence and positive emotion there is in the league clubs, who together with the Konzeptwerft have ensured that the season can take place. The restrictions have certainly made the season more difficult. Both trainings in the clubs and the upcoming regattas were initially on hold. However, a reasonable way was then found in the summer to start the season.

Where do you see the future of the league?

The league is a very successful concept and I hope it continues – you don’t always have to change successful things. The league develops its own history and value by taking place over a long period of time while remaining the same competition. We can be proud of the fact that now even top international sailors feel drawn to the DSBL and compete with their personal strengths for a German club and that others can and must measure themselves against them. Some see this critically. From my point of view, things can continue in this direction – just like in the Bundesliga for soccer players.

Do you still have goals in sailing?

I still have great fun sailing. At the same time, I want to do the things I do to perfection and share them with others. I want to pass on my experience so that we can sail better together as a team. So every competition is a new challenge, no matter if it takes place on the weekends on Lake Starnberg or in Porto Cervo at the Maxi Yacht Cup. It’s no longer about the really big trophies, but about the fun and success as a team.