Qualification Battle at Semifinal 2 of SCL 2018 in Saint Petersburg 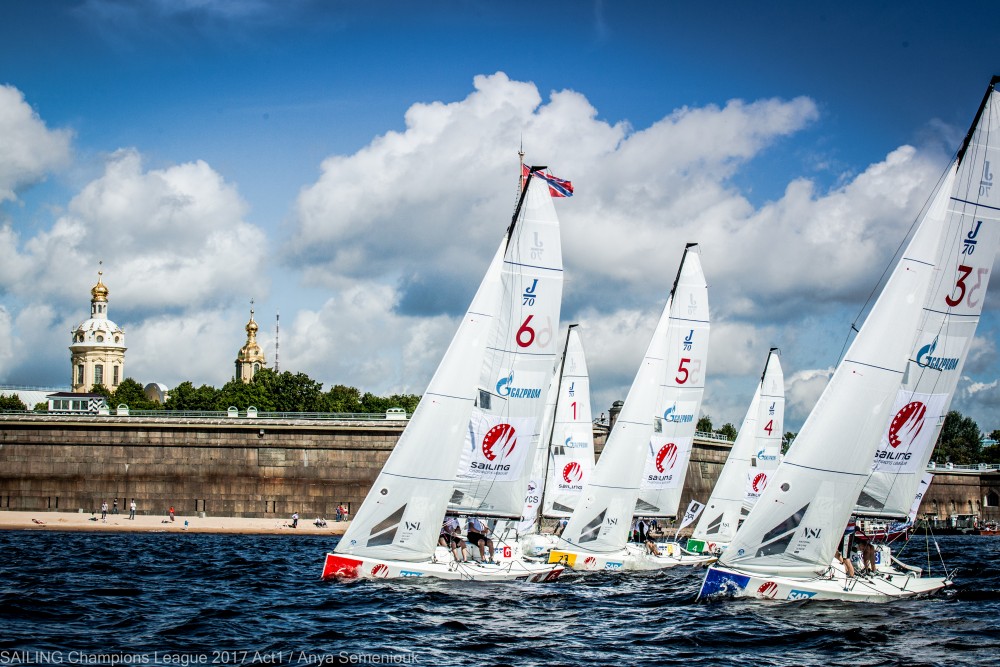 With football fever still fresh in the memory, now Saint Petersburg Yacht Club and Russia’s most beautiful city get ready to host 24 international clubs representing 12 nations at Semifinal #2 of the SAILING Champions League 2018. With four days of racing scheduled from 3 to 6 August, the setting – right in the centre of St Petersburg – couldn’t be more spectacular. The top 16 clubs win a ticket for the big Final of SAILING Champions League in St. Moritz, Switzerland (30 August to 2 September).

The famous Peter and Paul Fortress could hardly be a more appropriate setting, as the teams do battle for a highly-coveted place in the Finals of the SAILING Champions League, set to take place at the end of this month in St Moritz, high up in the Swiss Alps. 16 clubs have a chance to make it through to the Finals, so it will be all about finishing in the top half of the eight-boat heats.

Some of the competitors were in St Petersburg only a few weeks ago when they were sailing into the finish of the 1,000 nautical-mile Nord Stream Race through the Baltic Sea. Sergey Musikhin was co-skipper of the winning boat representing Russia, and three weeks after winning Nord Stream Race 2018 in a powerful ClubSwan 50 racer-cruiser, the 35-year-old is back at the helm of his team, Lord of the Sail – Asia.

Another skipper from the long offshore race is Kris Houmann and his crew from Frederikshavn Sejlklub, a small sailing club in Northern Denmark which frequently punches above its weight. Tactician Rasmus Damsgaard is delighted to be back in Russia’s second city for some close, boat-on-boat action: “Coming back to St. Petersburg is a great pleasure! It’s a very beautiful city and a spectacular scenery to be sailing right in the middle of the city. Even though it will be very tricky to qualify for the finals in St. Moritz, we hope to make it with a top five result!”

The strong current of the fast-flowing Neva Riverwill play a strong role in the strategy and tactics used by the teams for advantage around the race course. Saint Petersburg Yacht Club (SPBYC) is hosting SAILING Champions League for the third consecutive year. With support from main partner Gazprom, SPBYC presents sailing at its best in the maritime capital of Russia with the locals always ready to support the best European clubs racing close to shore.

Elena Solovyeva, project manager of SPBYC, explains: “The venue is one of the most outstanding sailing stadiums in the world and was used for hosting events like Extreme Sailing Series and World Match Racing Tour. The city centre provides an amazing scenery for sailing but is also a really tricky racing area. Neva river with its famous 3-knots current surrounded by the city walls – the wind is changing both force and direction. The teams have to look around 360 degrees all the time to seek for any chance to gain speed. Two years of SCL racing here show that even after a bad start you can still win a race or lose it after a good start.”

Livestream and results by SAP
As with all SAILING Champions League events, the final two days of racing on Sunday and Monday will be live broadcasted by SAP from 12:00 hrs (UTC+3), with expert commentators providing blow-by-blow analysis of the racing, aided by the detail provided by SAP Sailing Analytics. The SAP Sailing Analytics provide 24/7 additional statistics and data for sailors, fans, spectators and media like GPS tracking, real-time analysis, live leaderboard combined with 2D visualisation. You find all results on sapsailing.com!

You can follow the action on Sunday here: youtube.com/watch?v=l8KK7_YUF7I

You can follow the action on Monday here: youtube.com/watch?v=FkdTkQViOR8