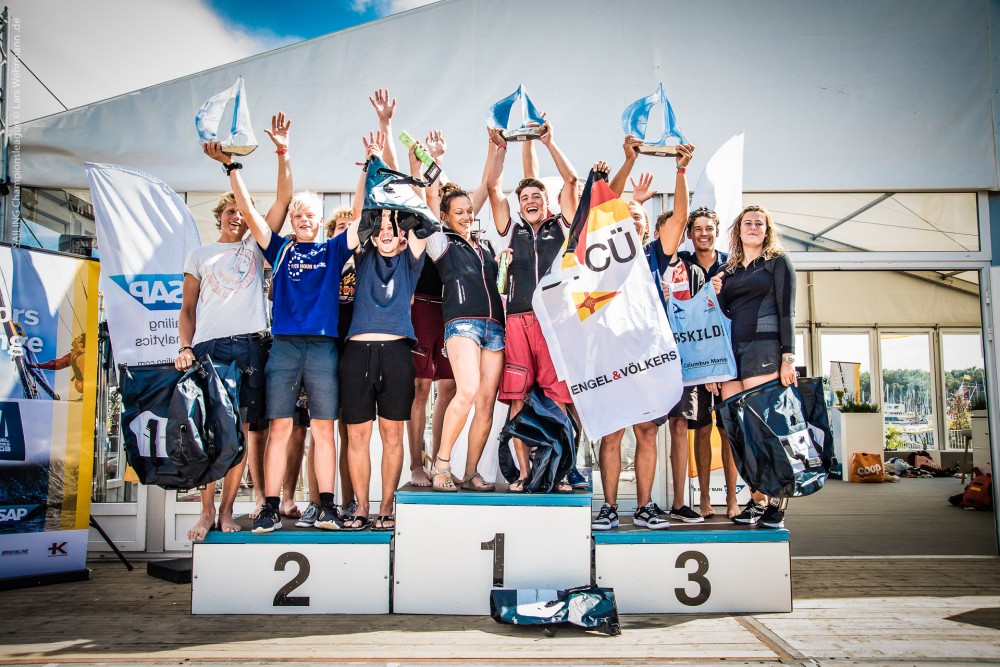 Three days of intense competition and a nailbiting four-boat final sees Bodensee Yacht Club Ueberlingen from Germany win the first ever event in the Youth SAILING Champions League after a stellar performance in Travemuende, Germany. Kongelig Dansk Yachtklub from Denmark is runner-up ahead of fellow Danish team from Roskilde Sejlklub in third place. Not only was this the first SAILING Champions League event aimed specifically at sailors aged between 16 and 23, it was also the first time a new race format – the four-boat final – has been tested.

After two final races, the first winner of the Youth SAILING Champions League is the German Bodensee Yacht Club Ueberlingen from Lake Constance. The young crew with helmsman Konstantin Steidle, Alexandra Lauber, Patrick Hasse and Jonathan Koch went as third ranked club into the Final Series and secured the overall win. Helmsman Konstantin Steidle explained: “The last race was really close and we are just happy to have won! It’s amazing but we haven’t realised it so far. We sailed at our best in the final races. It was a tough competition, especially the Danish teams did a great job, as well.”

Crew Jonathan Koch commented on the new Finals format: “We were very nervous about the final races but it was a lot of fun. It’s just all to zero before the races and every team can win. It’s a great idea.”

For the front group, the final day was all about making sure you had done enough to make it through to the four-boat final. After twelve flights with 36 races, the final was a battle Denmark vs. Germany: the Kongelig Dansk Yachtklub (KDY) and Roskilde Sejlklub from Denmark against Bodensee Yacht Club Ueberlingen (BYCUe) and Lindauer Segler Club from Germany.

This new Finals format means that your overall position from Qualifying is taken into the Final Series. So as winner of the Qualifying Series, KDY carried through a first place and hence already one race win. Whichever of the four clubs secures two race wins would become the overall champion.

In the first final race, BYCUe won, putting them level with KDY, the winner of Qualifying. The other two yacht clubs were really starting to feel the heat, desperately needing a win in the next race. In final race 2, BYCUe earned her second race win, giving the young crew from Germany the overall victory.

Oliver Schwall, founder and co-organiser of the SAILING Champions League said: “The experiment with the four-boat Final was a great way to finish off the regatta. It keeps the interest and excitement for much longer, because whoever wins the last race becomes the overall winner. How often do you see that in sailing? It will be interesting to see if other areas of the sport pick up on this idea. We’re proud to have been the ones to pioneer it here in Travemuende at the first ever Youth SAILING Champions League.”

The atmosphere among the 18 clubs from eight nations was friendly, respectful and exemplary for other events. “The sportsmanship you showed during the event was outstanding and set the benchmark for sailing worldwide,” added Oliver Schwall at the prize giving ceremony. “This weekend has been an important step forward for the League concept, two big experiments confirmed as a success. Innovation is risky, but we had a good feeling about introducing a Youth SAILING Champions League, and actually it has gone much better than I ever imagined. And with around 20% of the sailors being female, that created a fun atmosphere. It would be great see even more girls competing here in future events.”

Over the three days, the clubs experienced all kinds of wind conditions: from Freaky Friday, with the wind averaging 17 knots and gusting quite a bit more at times with big waves – it was a day to hang on to your hats – to lighter airs on Saturday and Sunday putting a greater emphasis on tactics.

Next weekend, the league competition continues with Semifinal #2 of the senior circuit of the SAILING Champions League. The event is hosted by St. Petersburg Yacht Club in Russia from 3 to 6 August, just a few weeks before the 2018 Final which will be hosted for the first time by Sailing Club St. Moritz, high up in the Swiss Alps from 30 August to 2 September.

Live broadcasting by SAP
Did you miss the races of Youth SAILING Champions League? Just visit sapsailing.comand click through the SAP Sailing Analytics for replays of all races and different and interesting statistics about the action on water. You find the overall results on sapsailing.com!