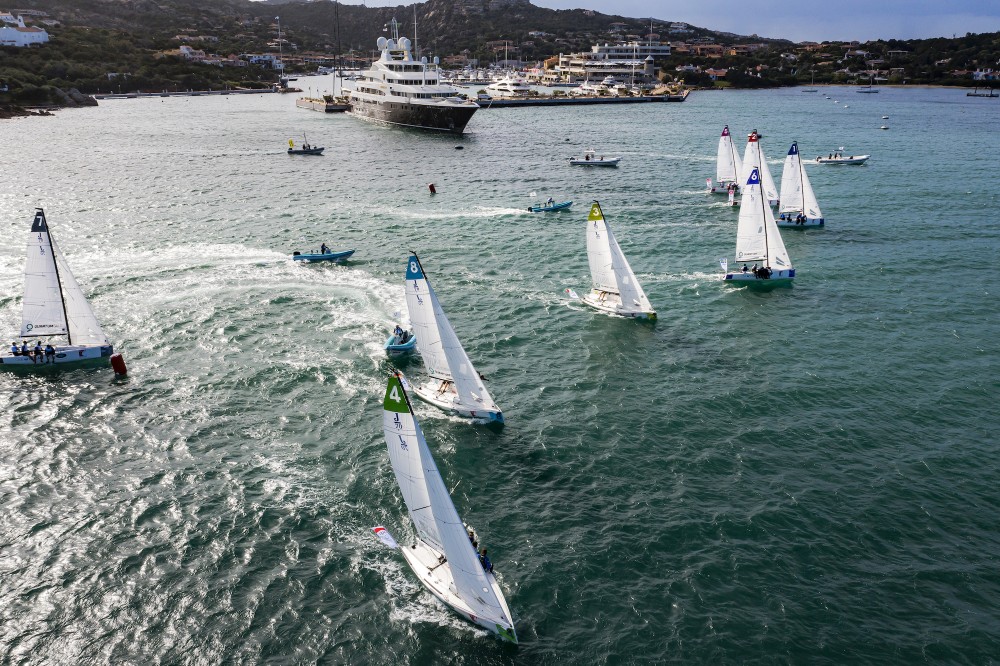 The first day of racing proper in the SAILING Champions League Final saw the YCCS organise the competitions within Porto Cervo Marina. At the conclusion of 11 races, with almost 3 flights completed, the Finnish team Esbo Segelförening leads the provisional ranking, followed by Switzerland’s Seglervereinigung Kreuzlingen and the Italian crew representing Aeronautica Militare in second and third place respectively. The YCCS team, sitting in fourth place, has completed an extra race with respect to the top three crews.

Today will go down in the annals as the first time that the Yacht Club Costa Smeralda held racing inside the marina in Porto Cervo. The stadium racing provided the perfect solution to the continuing adverse weather conditions in the area, with waves of around 3 metres and 25 knots of northerly wind. After having verified the possibility of racing within the port area, and thanks to the collaboration of the Harbour Master’s offices for Porto Cervo and Golfo Aranci and the cooperation of Porto Cervo Marina, the first starting signal was sounded at 2.30 p.m. The news brought smiles from the sailors as well as the curious spectators who were able to watch the event from the shore.

Five hours of action on the water ensued, with the teams holding nothing back as they battled aboard the YCCS fleet of J/70 boats. On equal points at the top of the classification are the Finns of Esbo Segelförening and the Swiss crew of Seglervereinigung Kreuzlingen, both of whom notched up a win and a second place today. Two points further back in third place is the team from Italy’s Aeronautica Militare, who posted a second and a third place finish today. The top three teams have yet to complete the final race of the third flight, while the YCCS team in fourth place has completed all three races, clinching two convincing wins and a fourth place which cost them a place in the top three of the provisional classification.

Lucas Karlemo, helmsman on Esbo Segelförening: “Sailing inside the harbour is really nice. I like the shifty conditions, that’s what we are used to in Finland. As a Finnish club, it is an honour to be racing here in the SAILING Champions League Final. It has been a goal for many years now, so I’m happy that we made it. The first race was tricky, we had a really bad start, standing still on the starting line. On the last upwind we overtook six boats and finished second. In the second race we had a good start and we led that race from the beginning.”

Niccoló Bertola, helmsman of Aeronautica Militare: “This was our first time sailing inside a harbour like this. The course was really short and we had very challenging conditions but we enjoyed it. We finished second last year, close to winning the trophy. This year is even harder, the competition is strong. Our goal is to reach the final four.”

Racing will continue tomorrow with the first starting signal scheduled for 10 a.m. CET. The action will be streamed live.

Here you can find the results.