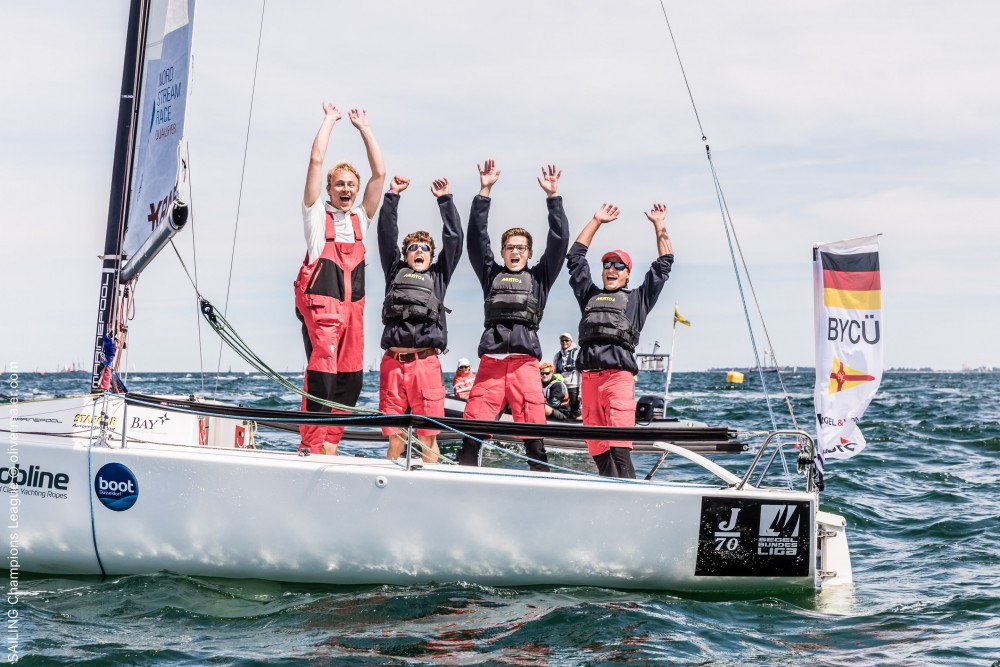 Bodensee-Yacht-Club Überlingen won the second edition of the Youth SAILING Champions League after three days of sensational racing at Kiel Week in Germany. Regattaclub Oberhofen from Switzerland is runner-up ahead of Flensburger Segel Club in third place. A total of 21 clubs from nine nations came to Kiel for the under-22 regatta, which follows the same, proven format for league racing in multiple nations and the SAILING Champions League (SCL) itself.

Flensburger Segel-Club was leading the qualifying until the final round when Überlingen came charging through and sneaked through qualifying in first place by a single point. It was a critical advantage to carry through to the four-boat final, as their victory in qualifying counted as their first point on the board in the final.

Überlingen were over early in the first start and had to go back. However, they were able to use superior boatspeed to sail quickly to the top of the field. The team from Lake Constance worked hard all the way to the finish and won the first race of the finals, which meant the competition was over. The other three teams never had a chance to post a winning score in the final because Überlingen had already won. It meant they had successfully defended the title they won a year earlier.

Konstantin Steidle, helmsman from Überlingen, commented: “Since we had an early start in the last race, we had no choice but to go to the other side away from the other three teams. Then the wind played into our hands and we finished the race with confidence. I think the format of the Final Series is good, but unfortunately not all of us are allowed to participate next year because of the age limit. We hope the next team from Überlingen will be able to repeat this success next year.”

This was also the first intercontinental SCL regatta with the Australian competitor Royal Sydney Yacht Squadron (RSYS). Gradually, the league concept of racing is spreading further and further around the world. Jack Littlechild, skipper of the RSYS team said: “Most of us had never sailed in a J/70 before, so the main focus for our workout sessions has been strategy and tactics as well as a big emphasis on boat handling. We are very proud to have been representing our country and the Royal Sydney Yacht Squadron here. We want to use this opportunity to help promote the SAILING Champions League in Australia and get everyone back home excited for next year’s event.”

previous article « Australia’s Debut at Youth SAILING Champions League in Kiel
next article Last Chance to Qualify for the SCL Final at Qualifier 3 in St. Petersburg »