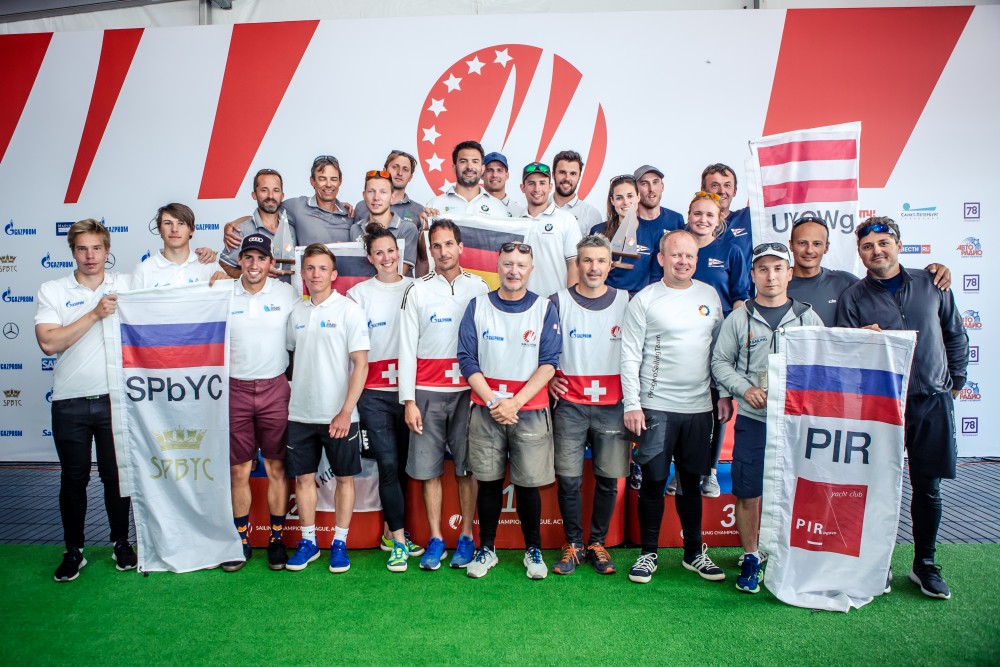 Bayerischer Yacht-Club from Germany has won the third and final Qualifier of the SAILING Champions League 2019. They won by 4 points from the also German runner-up, Wassersport-Verein Hemelingen. Union Yacht Club Wolfgangsee from Austria became third. Of the 20 teams competing, the top six have qualified for a place at the Final in St. Moritz next month. They are:

The event was frustrated by no racing on day one, due to excessively strong winds. This was followed by two days of very light airs, which meant only five flights of racing could be completed before the final day. The wind for the last day was also light but consistent and enough for another three flights, making every result count more than usual.

Skipper Julian Autenrieth of the winning team from Bayerischer Yacht-Club commented: “The location in St. Petersburg is great here in the middle of the city. But the conditions were really tricky, with the low winds and the current. You always had to be able to stay calm. What we did well throughout were the starts with the current. This meant that we were often starting off among the top three, which made the races easier for us.”

On Friday there was a Gala Dinner under the theme of ‘Connecting through sport’, which took place alongside five international teams from the Nord Stream Race who had just completed the 1,000 mile offshore race along the length of the Baltic Sea.

Mans Lundberg from Finland is a sailor who competed in both the offshore Nord Stream Race and then went straight into the short-course J/70 sportsboat racing in the SAILING Champions League on the Neva River. “As I sailed in Nord Stream Race and SAILING Champions League I knew a lot of the people at the Gala Dinner. It was very connecting between the sailors. We were at the same table as the guys from Lithuania, and we talked a lot with them. It was a really nice event” said Mans Lundberg.

The Final of the SAILING Champions League will take place from 15 to 18 August in St. Moritz, high up in the Swiss Alps.

Results by SAP
The SAP Sailing Analytics provide 24/7 additional statistics and data for sailors, fans, spectators and media like GPS tracking, real-time analysis, live leaderboard combined with 2D visualisation. You can look back through the races and find all the results on scl2019-qualifier3.sapsailing.com.

previous article « Last Chance to Qualify for the SCL Final at Qualifier 3 in St. Petersburg
next article Alpine Showdown for the SAILING Champions League Final »